Level of Authenticity: I made a tasty thing!  I got this recipe out of a book called “Da Vinci’s Kitchen: A Secret History of Italian Cuisine” by Dave DeWitt.  I haven’t actually read the whole book, but I’m going to go out on a limb and say I think it’s probably more pop hist than it is an exemplar of scholarly inquiry into the field.

Next Steps: There is a whole lot of “I don’t know” and “I DNRTFA” in this blog post.  Recently I bought a whole bunch of period cookbooks, including Platina and Maestro Martino, and I have several very fascinating looking books like “Eating Right in the Renaissance” and “Eating and Drinking in Renaissance Italy” that I’d like to delve into.  I’m enjoying my culinary journey and I think it’s time for me to do more research as well as continuing to make tasty things.

Who: DeWitt lists the author of this recipe as a man named Platina.  It looks like he gives a good portion of one chapter to Platina and his career.  I haven’t read it, so all I know about Platina at this point is that Master Thorvald says Platina plaigiarized 40-60% of his material from Maestro Martino, who is the chef whose recipes I have previously been playing around with.

What:  DeWitt gives both an English language translation of Platina’s recipe, which he labels “Platina’s Broad Beans in the Frying Pan”, and a modern redaction, which he labels “Faba in Frixorio (Fried Figs and Beans with Kitchen Herbs)”.

Where: It looks like Platina was active in and around Rome.

Why:  Most of the information I feel that I’m missing right now would go into this category.  Why this particular dish?  Who is likely intended to eat this dish?  What part of the meal does this dish fit into?  So many questions.

How: I wasn’t that thrilled with how my tabular format came out last week, so I’m going to revert to real sentences and paragraphs.

Recipes: The recipe, as translated on p. 36 of DeWitt, reads “In a frying pan well greased with oil, fry broad beans which have been cooked and softened with onions, figs, sage, and several other herbs of choice, and put on a plank or disc spread in the form of a cake, and cover with spices.”  The modern redaction, at p. 108 of DeWitt, calls for kidney beans and dried figs, and specifies garlic, rosemary, basil, thyme, and Italian parsley for the herbs while leaving out the sage.  At this time, I don’t have access to Platina’s Latin (?)/Italian (?) original.  There are quite a few differences between the translation and the redaction and I decided to stick much closer to the translation. 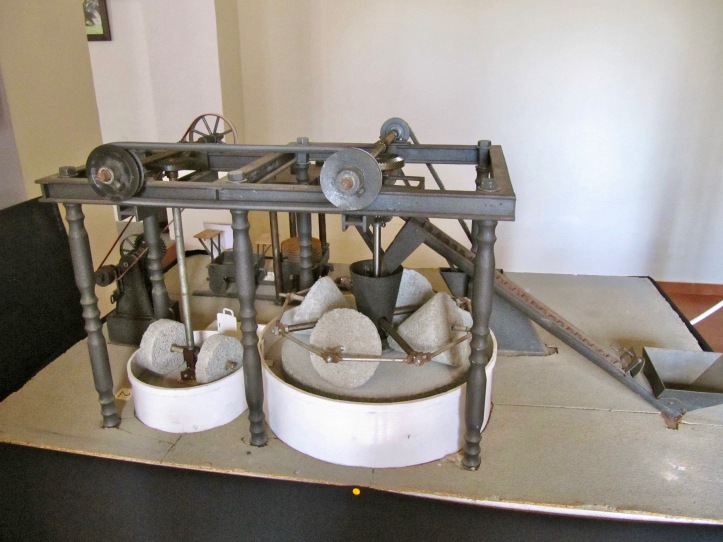 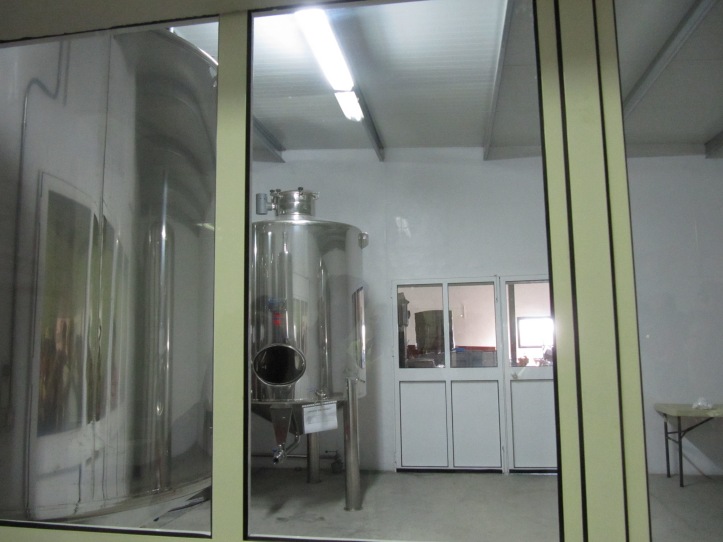 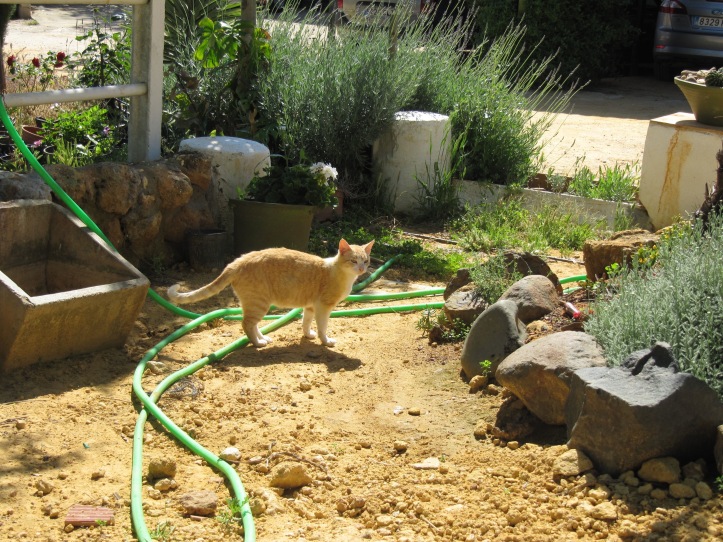 Tools:  I used a selection of knives, cutting boards, and prep bowls.  I’m not exactly certain that Renaissance chefs used exactly the same kinds of tools but these are not things that have seemingly undergone major technological upgrades in that time frame.  Once again, I find myself using a modern electric range because that’s what I have in my home.  Some day I really, really would like to be able to experiment using period heat sources – you can see my pictures from the kitchens at Hampton Court Palace (London) and Castello Estense (Ferrara) about halfway down this blog post.

Processes:  I like to mise en place before I start cooking or baking anything.  I don’t know if this is a period technique, we shall see if anything comes out of my research about it.  The translation of the recipe didn’t specify what size of pieces might be appropriate for each ingredient, so I defaulted to my modern assumption that unless otherwise specified all of the pieces of ingredients should be about the same size as each other. 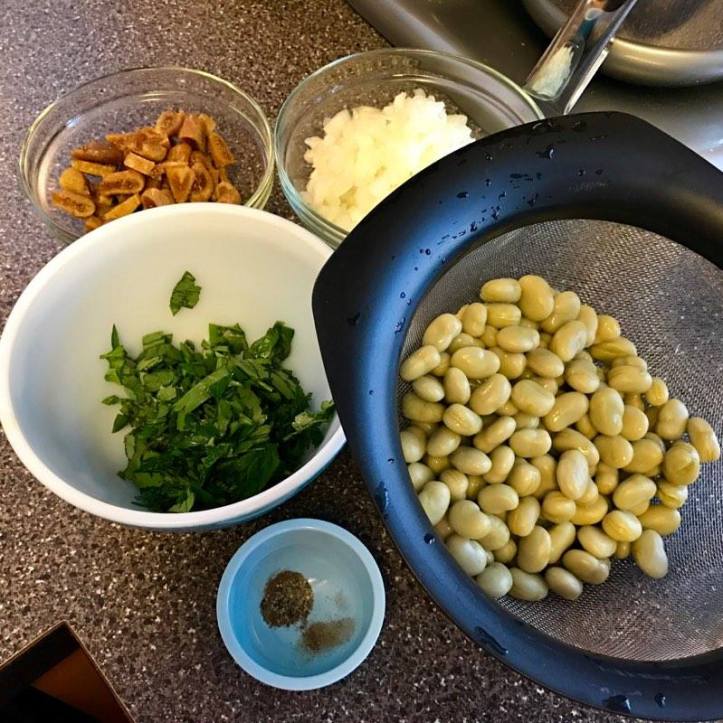 In preparing the ingredients to assemble the recipe, my biggest departure from period technique is that I used canned beans instead of cooking from dried (or fresh?).  I’ve previously experimented with cooking my own beans from dried for modern recipes and I found it quite frustrating and energy-inefficient.  For a modern recipe, it doesn’t really make a difference but there is a chance it would make a difference to the texture outcome here, which I’ll discuss more below.

To assemble the recipe, I started by heating the oil in a big skillet and then sauteing my onions for several minutes until they were translucent.  This is a ubiquitous technique in modern Western cooking but I’m not yet sure how often it was used in Renaissance Italian cooking.  Then I added the beans, which I had previously rinsed and drained.  I wasn’t certain what format the dish should take.  DeWitt’s redaction seems to contemplate the beans staying whole as you cook them.  The recipe translation talks about forming the finished dish in the form of a cake, which suggested that maybe the dish needed to be more like a pate or bean dip.  In some ways the technique of frying previously-cooked beans in grease resembles the technique for making refried beans, which could suggest that this dish should be, for lack of a better word, gloopy.  If I had cooked the beans from dry instead of opening a can, I think there is a better chance that this is the texture I would have achieved.  With the beans that I had, I opted to mash some of them gently against the bottom and sides of the skillet as I was stirring for a texture somewhere between dry and complete mush.

The translated recipe calls for frying all of the herbs with the dish and adding the spices only on the top.  I didn’t have a large amount of spices, maybe about half a teaspoon total, so I opted to mix them in as I was cooking rather than sprinkling them on top.  The “cover with spices” instruction was a bit difficult for me to interpret, since I don’t know yet what kind of spices would be most appropriate for the dish.  Hopefully with further research I’ll be able to get a better understanding.

In order to form my dish into a cake, I squished it all into an appropriately-shaped container and let it chill for a bit before turning it out onto a plate.  I wasn’t sure how this was going to work out but the semi-squished beans seem to have given it just the right amount of structural integrity.  The way the translation is worded, it sounds like maybe the texture is meant to be more pate-like, so the dish could be shaped freehand.

Like I mentioned previously, it wasn’t clear from the information I had as to where this dish would fit in a meal of the period.  Sometimes it’s helpful to draw on modern ethnographic evidence and sometimes it isn’t.  In Western Europe, I usually find that information about folk customs can really only take you reliably back into the eighteenth century.  In this case, I did use some modern ethnographic parallels to decide how to present and serve my dish, but I wouldn’t be content leaving it at this for a competition.  Instead I’d want to do a lot more research about how and when it would have been served in the fifteenth century.  With that caveat out of the way, here’s what I did this time.  Typically, a modern Italian meal consists of a primo (first dish), usually a soup, pasta, or risotto; and then a secondo (second dish), which is usually just a roasted or grilled piece of meat or seafood.  If you want vegetables with your meat, you need to order verdure separately, and they are almost always just straight steamed or grilled vegetables.  A dish like this would be more likely to appear on the appetizer/antipasto part of the menu.  Because of this, and also because I had some bread dough in the fridge I needed to use up, I baked a loaf of bread and encouraged my taste testers to eat the bean dish on the bread.  Not all of them did, some of them just ate it straight up, but it was declared a tasty success.