Herb Soup for a Melancholy Temperament 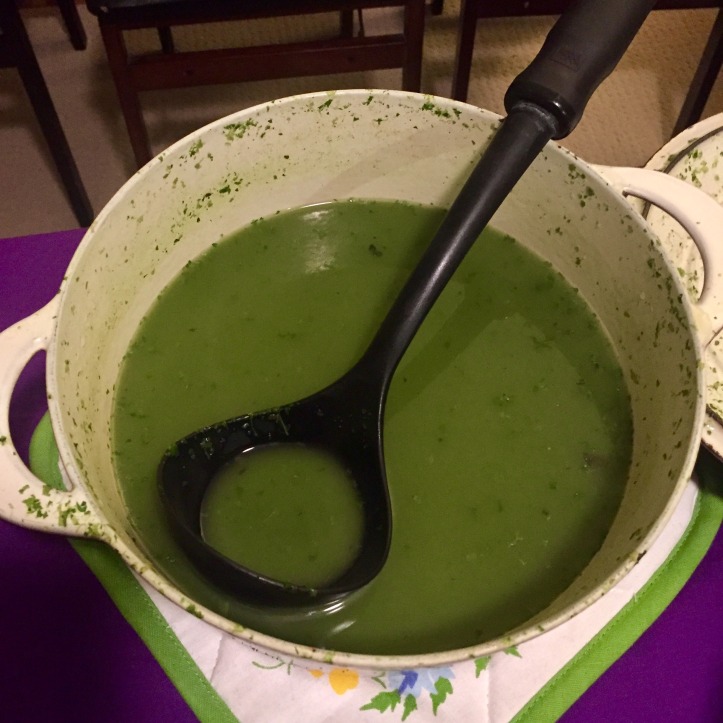 Level of Authenticity: I made a tasty thing!

Why:  I’m going to start with this one this time.  I have often thought it would be cool to do an “Eat Right for your Humour” type period cooking project and this month I succeeded in convincing people to have this as one of the themes for Montengarde’s Culinary Night (the other theme was “Sugar and Spice and Everything Nice”).  The four humours theory of medicine that was dominant in the middle ages and renaissance focused not just on curing specific symptoms, as modern Western medicine does, but also on prescribing diet and exercises appropriate to keeping an individual’s humours in balance.  There are a variety of tests you can take online to determine what your medieval humour might be although I did not really need a test to tell me that I am of a melancholy humour.

Who/When/Where:  The author associated with the recipe I used as an inspiration was once again Maestro Martino of Como, author of Libro de arte coquinaria. Maestro Martino was a cook in 15th century Rome at the residence of the Patriarch of Aquileia.  I’ve been using the recipes collected in Redon et al’s “The Medieval Kitchen: Recipes from France and Italy”, but I’ve since discovered that there is a whole modern publication dedicated just to Maestro Martino and his work, “The Art of Cooking: The First Modern Cookery Book”.   This book is now on my “to buy” list because I suspect it might help me answer some of the more in-depth “who” questions I like to be able to answer, like “who could become a chef?” “who were the diners eating Maestro Martino’s dishes?” and “who was the intended audience for the book?”

For information on how to treat a melancholy temperament, I was limited this month for sundry weighty reasons to information I was able to find on the internet using my phone.  This result was sort of frustratingly inadequate and also, alarmingly, led me to the discovery that there are still branches of alternative medicine out there advocating the use of humour theory when determining what to eat.  I didn’t wind up coming up with any period sources, but I did come across this blog post, discussing diet suggestions made in “The Anatomy of Melancholy”, first published in 1621 by an English author named Robert Burton (1577-1640).  If I was going to do more research on this project, I’d want to ask questions like “who was Robert Burton and what training did he have that made him an appropriate authority on melancholy?” and “who was the intended audience for the book?”, although ideally I’d hope to find a source that dated before 1600 and ask the same questions about that source instead.

What:  My soup was based primarily on Maestro Martino’s “menestra d’herbette” (soup of greens).

Theoretical Underpinning: I was actually going to call this header “Science” but I didn’t want to go on a side track about why alchemy and astrology do properly belong to the History of Science because it is a subject I have an entire undergraduate degree in.  While I already know a fair amount about what kinds of theories and paradigms of knowledge about the natural world were in currency at what times, I know less about the contents of those theories than I’d like.  Sadly, I didn’t have time this month to go as far into this stuff as I would have liked.  From the blog post I linked above, I was able to determine a number of foods that were considered appropriate for treating melancholy.  Several of them fell outside of my self-selected parameters (gluten-free and vegan), but there was one recommendation I felt I could work with, which was “all manner of brothes [are best], and pottage, with borage, lettuce, and such wholesome hearbes are excellent good.”

Recipes:  Given the types of ingredients listed by Burton, I thought that I could probably improvise a green soup, but I wanted to check my sources to see if there was anything existing first.  It turned out that there was a recipe for almost the very thing I wanted to make in Redon et al.  Since last month, I actually discovered that the original recipes, untranslated, are in the back of the book, and I did look at the original, but the language is different enough from the form of the Italian language that I’ve been learning that it wasn’t much help.

In English translation, the recipe reads “Take Swiss chard leaves and a little borage; cook them in boiling clear water until the water comes back to the boil; then drain them and chop fine with a knife.  And take a little parsley and raw mint and chop them along with the greens.  Then pound everything in a mortar, and add to a pot with rich broth and boil briefly.  If you like, you can add a little pepper.”

Materials:  This recipe did not call for as many substitutions as I sometimes have to make.

Tools:  I do my cooking on a modern electric range, though some day I would really love to try cooking using period heat sources.  The other piece of modern equipment I used here was my immersion blender, which I used in place of the step that calls for pounding the cooked greens in a mortar.  I would also like to try doing this, but I need to get a much larger mortar and pestle first.

Processes:  In this case, I had few substitutions that called for a radically different treatment than what the original recipe called for, so I was able to follow it fairly closely.  I started a stock pot simmering for my vegetable stock fairly early in the day.  When it was time to cook the greens, I steamed them very quickly in about half an inch of water in a big skillet, then rinsed them immediately under cold water so they would stop cooking and keep their green color.  I strained the stock, then added some olive oil, the cooked greens and chopped fresh mint and used the immersion blender to puree.

Result: I was a bit skeptical about this recipe and I didn’t think it was going to taste very exciting.  Mainly what I had discovered in my research about melancholy was that foods that most people think of as delicious or comfort foods are not considered beneficial for a melancholy temperament, leading to a situation where the melancholic is stuck eating foods that are dull or even depressing, which seems to me like a bit of a vicious circle.  Nonetheless, people at culinary night did seem to genuinely enjoy the soup, so in the end I’d say it turned out better than I expected.